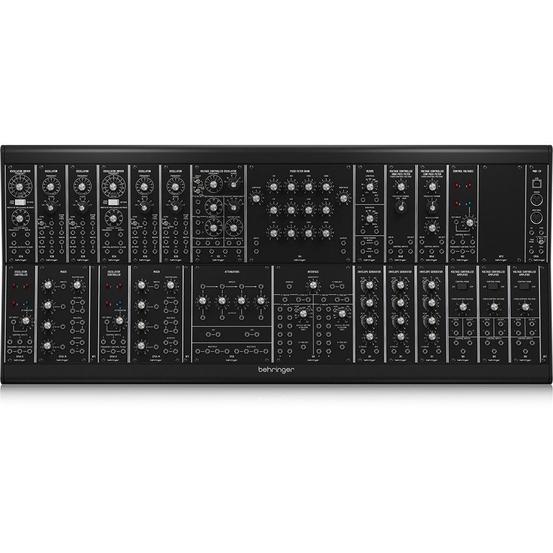 Complete "System 35" Modular Synthesizer with 25 Modules, MIDI-to-CV Converter and EURORACK GO case. The SYSTEM 35 is an amazing tool for those who are just starting down the psychedelic, neon-bathed road of modular synthesis. This whole setup comes equipped with two 921A OSCILLATOR DRIVERS, four 921B VCOs and a 921 VCO all of which provide five fully featured voices that you can adjust and tweak any way you want! The two CP3A-M MIXER modules allow you to mix up to four inputs each which you can then patch out to other modules. Want a nice pad to your song? Have one signal go to a delay module and have another go into a step sequencer or other modules in the SYSTEM 35 for more intricate patches and hours and hours of fun! The SYSTEM 35 also includes the CP35 ATTENUATOR module with 4 linked attenuators and two sets of 4 multiples and reference voltages. Connecting a single signal to the CP35’s first input will allow it to pass to all 4 outputs. This allows you to have up to 4 variable outputs of a single signal source. Also included are two banks of 4-point multiple circuits for you to be able to route multiple copies of input signals to other modules.