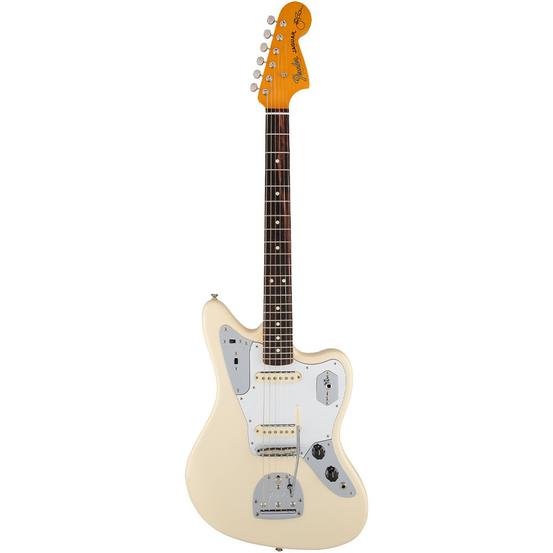 Johnny Marr is best known as the strikingly dynamic guitarist-arranger-songwriter behind the Smiths, who redefined and ruled U.K. pop in the 1980s. A master of melody, layering and texture, Marr has brought his own instantly identifiable genius to the proceedings ever since, in stints with The The, the Pretenders, Modest Mouse and the Cribs—to say nothing of his solo career and innumerable guest appearances. The Johnny Marr Jaguar is a fantastically non-standard model that is as distinctive as the sounds he wrings from it.

Rather than traditional slide switches, Marr’s signature Jaguar has a special four-way blade pickup switch on the lower horn, delivering the bridge pickup alone, the bridge and neck pickups in parallel, the neck pickup alone, and the neck and bridge pickups in series. The Johnny Marr Jaguar features special nylon bridge-post inserts for improved bridge stability, and a "taller" tremolo arm with a nylon-sleeve insert to keep it from swinging loose.

Nitrocellulose lacquer is one of the great original-era Fender electric guitar finishes, and is still used today on select instruments. Thin, porous and delicate, it’s a premium finish prized for sonic qualities that let body woods breathe with their true tonal character, and for an appearance that ages and wears in a distinctive way appealing to many players. In an especially authentic touch, the neck on this signature model has a comfortably broken-in custom profile (the shape of the neck in cross section) based directly on Marr’s 1965 Jaguar.

For specially voiced tone worthy of such an inventive and versatile guitarist, this Jaguar is built with "Bare Knuckle" Johnny Marr single-coil custom-wound neck and bridge pickups. In an extra-special design element, the upper horn of the Johnny Marr Jaguar features two slide switches—a "universal" bright switch that kicks everything up a notch or two, and a separate bright switch that only affects the "series" pickup switch position.