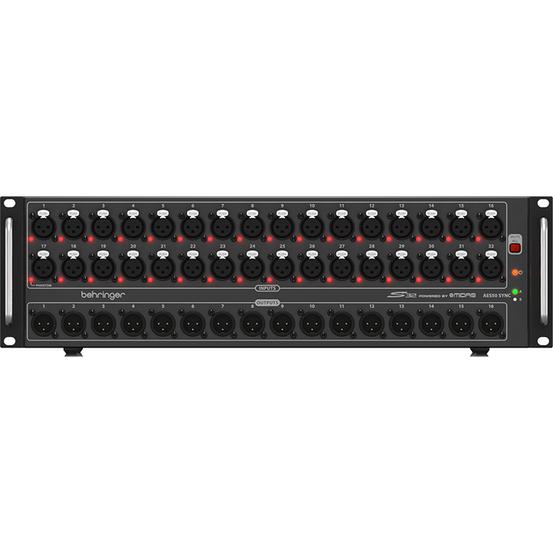 Digital mixing has revolutionised virtually everything in the live entertainment production workflow. The ultra-affordable S32 digital stage box bridges the gap between the onstage talent, Front of House (FOH) console and the rest of the world with its ultra-fast and rock-solid performance!

The S32 provides 32 MIDAS-designed remote-controllable mic preamps, plus 16 balanced analog XLR returns at the stage end – and all it takes is a single Cat 5e cable (up to 328 ft / 100 m). While KLARK TEKNIK, the industry-leader in high-end digital audio processing, invented the AES50 SuperMAC technology that made it all possible – our superb scale of production makes the S32 so very affordable.

Ever since its formation in the 1970s, MIDAS has had a long history of innovation and leadership in the world of audio mixing consoles. Employed by the most famous touring acts and installations world-wide, legendary MIDAS consoles such as the XL4 and Heritage H3000 quickly became industry standards.

MIDAS has earned their impeccable reputation due to their no-compromise approach for audio and build quality and in particular for their Award-winning Mic Preamps which are considered by industry experts as the industry’s best sounding designs. Building on this legacy, the XL8 and PRO Series of Live Mixing Systems continue this great heritage of Award-winning audio quality. Behringer is proud to incorporate a MIDAS designed mic preamp for the ultimate in high-quality audio reproduction in both live and studio environments. Find out more about MIDAS’ amazing legacy by visiting their extensive website.

“When used as part of a complete X32 system, two S32 Stage Boxes can be connected via the mixer’s built-in dual AES50 ports, providing connectivity for up to 64 remote mic/line inputs, 32 balanced outputs and the awesome Powerplay P-16 Personal Monitoring System – which can feed up to 16 individual monitor mixes via CAT5 to every musician on stage. When 32 inputs are not enough, an S32 Stage Box may also be cascaded with an S16 or SD16 for full use of the 48-channel bidirectional capacity of AES50 SuperMAC networking on just one CAT5 line. We also included 2 optical ADAT outputs and two AES-3 (AES/EBU) stereo outputs for digitally connecting to outboard devices, such as PA system controllers. The S32 also features a convenient USB port for system updates via your PC – plus MIDI I/O for your lighting systems and sound module control.”

The S32 was initially designed with our flagship X32 Digital Mixing Console in mind, but any mixing board with AES50 networking capability can still tap directly into the S32’s powerful feature set. For instance, an S32 and X32 CORE can be used to create an amazing power-combo for remote-controlled digital mixing in only 4U. While the X32 CORE may be used to run an independent monitor mix, it can also relay and share all I/O with the FOH – whether you are using an X32 Series console, or any other digital mixer that supports MADI, Dante, ADAT or AES50 I/O. We off er very reasonably priced option cards to replace the standard 32 x 32 channel USB interface for exactly that purpose. You can even choose to run the complete show from the stage rack’s X32 CORE via our remote control apps. And since the S32 and X32 CORE communicate via AES50, they don’t even have to live in the same physical rack, but can be separated by up to 100 m (328') of CAT5 cabling, if that is more convenient for your venue.