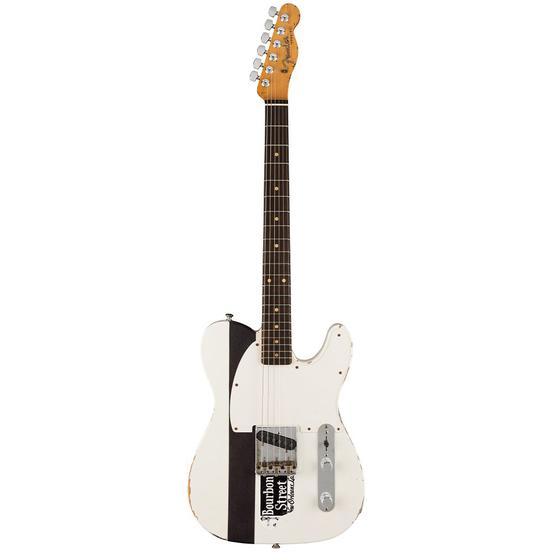 Loading product options
This special edition, masterbuilt model is one of only 70 produced worldwide. There is only one available, so if it is currently displaying as "Backorder" or not showing stock at any store locations this is not because it's sold out, rather that it hasn't arrived yet.

The Legendary Joe Strummer played guitar with an intensity that cut like a knife with raw energy and passion in every intense swipe at the strings. He was the embodiment of Punk culture and a crucial component to its development. His style was direct, honest, and empowering to the listener which would create legions of die-hard fans around the world.

Best known for his work with The Clash, Strummer and his bandmates were a major part of creating punk rock and has inspired countless other bands to this day. Strummer commanded the stage like a fiercely determined punk rock commander and blasted songs out of his guitar like a machine gun. His weapon of choice for the London Calling and Combat Rock era was his tried and true Fender Esquire®. A perfect match for his stripped down, no nonsense delivery, the Esquire was the perfect tool for Strummer to hammer away on show after show working out angst and often having his drummer play on the strings with drumsticks during songs. The guitar was one of Strummer’s favourites and appeared on many of their most famous performances especially in the latter years of the band.

We are very happy to be able to re-create this incredible piece of music history in the Fender Custom Shop for a special limited edition run. Master builder Jason Smith has reincarnated the Esquire to its Clash era look in exacting detail with its black racing stripe, custom “Bourbon Street” sticker and custom Relic finish. Not just for the collector, this guitar is built to take a beating and produce straight-ahead searing tone for anyone bold enough to wield it in combat on stage.