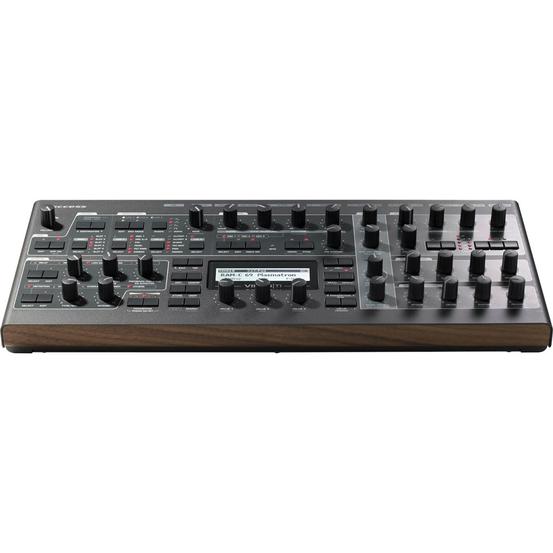 Voted The Best Hardware Synthesiser of the Decade in Future Music Magazine! Total Integration uses innovative technology to greatly expand the VIRUS Synthesiser, resulting in an advanced stage/standalone instrument, while simultaneously extending the product capabilities with a suite of compelling studio integration features.

This Virus TI 2 will make any desktop proud! The TI Desktop features an all-metal enclosure with a wooden strip on the front. Loads of knobs and buttons give direct access to the most important sound shaping parameters. This range of instant access hands-on control will delight those who don't like menu diving. Like all other Virus TI synthesisers, a stereo analogue input offers the power to process external signals through the Virus' sound engine. An optional 19" rack mounting kit is available for purchase.

There are not many modern synthesisers which can claim to have shaped the sound of music -- from electronica to soundtrack -- as much as the Virus line of synthesisers has. The Virus is known as much for its flexibility and powerful sound as for Total Integration, Access’ award winning way to interconnect a hardware synthesiser with your DAW.

The first Virus was released in 1997 and each new iteration has added more features more powerful hardware, and greater musical potential. That evolution explains why the Virus TI series is so sought after and why it receives such praise from owners, press, and fans all over the world.

Artists including Depeche Mode, Madonna, Linkin Park and The Prodigy tour with a Virus-based setup. Producers such as Sasha, Pete Tong, Roger Sanchez and Dr. Dre consider the Virus a core part of their studios. Composers such as Hans Zimmer, James Newton Howard, John Powell and Mark Isham are enthusiastic Virus users, utilising its signature sound for their Hollywood blockbuster soundtracks.