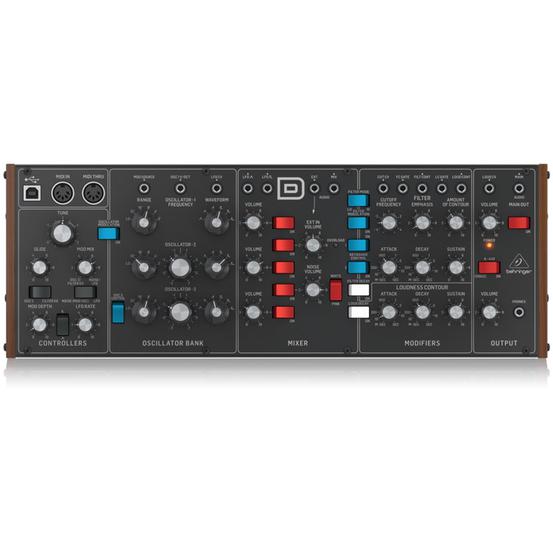 The Behringer Model D is a clone of the iconic MiniMoog Model D synthesizer. Behringer have attempted to faithfully re-create the original, while adding an updated perspective, with some modern additions. Like the original MiniMoog, the Behringer Model D is capable of creating rich analog sounds via it's 3 VCO's coupled with the legendary 24dB voltage-controlled ladder filter. The filter is switchable - Lo Pass/Hi Pass and emulates the smudgy cut-off sweeps and classic "bite" of the MiniMoog resonance, very faithfully. In addition to this, Behringer have added an overdrive circuit to contribute extra harmonic depth to the sound. The other major change comes in the unit's build. The keyboard, present on the original, has been removed and the Model D is housed in a Eurorack friendly, desktop form-factor; saving on space and allowing for greater portability. Further additions include USB/MIDI integration and CV jacks on the front panel for use with modular units.

Behringer has worked hard to authentically re-produce the original D Type circuitry with matched transistors and JFETs, ultra-high precision 0.1% Thin Film resistors, polyphenylene sulphide capacitors, 5 variable oscillator shapes with variable pulse widths, a dedicated and fully analog triangle/square wave LFO and an analog signal path based on authentic original VCO, VCF and VCA designs. The entire unit was designed and engineered in the U.K. and the result is a synthesizer that produces iconic sounds with an expanded set of control options, giving you an even bigger set of sonic possibilities.

The semi-modular nature of the Model D means it requires no patching to generate sound, it's ready to go straight out of the box. However the patch points on the front panel allow it to integrate nicely with a modular setup. The front panel also features 48 controls to give you direct and real-time access to all important parameters, providing great interaction and tweak-ability.

Like the original, the Behringer Model D offers classic analog synth sounds, but in a convenient desktop form-factor (Eurorack transferable) and at a more affordable price.