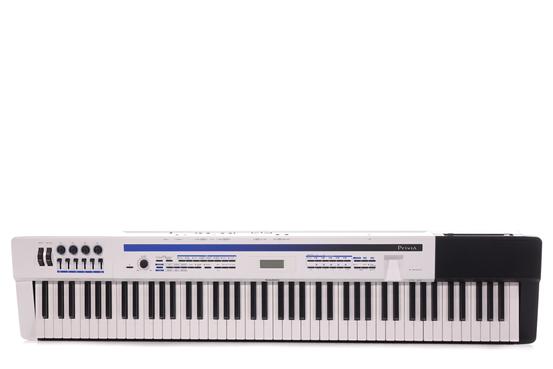 3 ⭐⭐⭐ This Casio PX5S 88 Note Stage Piano has been fully tested and serviced by our team of music experts and works perfectly. It does show some signs of superficial wear, but after all you need to be able to use your rental! All the photos to the left are of the item you would receive so you can take a look (yes, we really have someone downstairs photographing every preloved product), any obvious wear or marks have been highlighted so you can see for yourself. Includes: Music rest and a power supply

At the heart of the PX-5S Stage Piano is Casio’s proprietary AiR sound source which provides incredible realism, detail and expression for grand piano sounds. In the PX-5S, the power of AiR has been expanded to provide stunning fidelity and control over other instrument tones and effects with 256 notes of polyphony.

In addition to Privia’s award winning grand piano sounds, the PX-5S has an arsenal of newly developed sounds including classic electric piano, harpsichord and clav sounds. Some of these tones are complete with release samples, amplifier and speaker simulations for an incredibly authentic experience.

The Privia PRO PX5S has a maximum polyphony of 256 notes, making it a highly expressive instrument for performing.