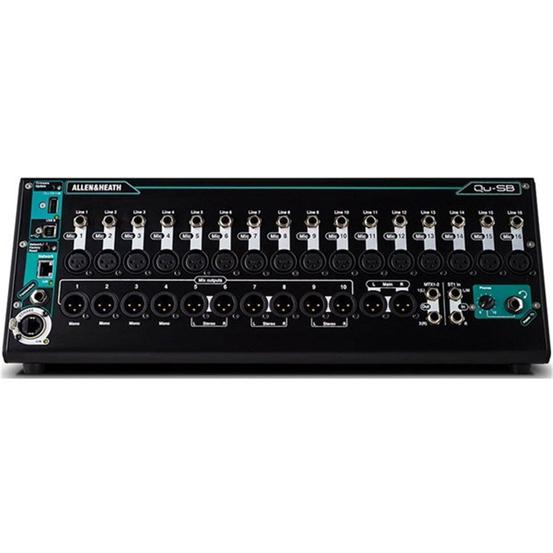 Qu-SB is an ultra-compact digital mixer which frees you to mix from anywhere in the venue and provides a smart, portable solution for performing bands and artists. Qu-SB is portable enough to carry under one arm and comes loaded with our highly acclaimed suite of FX emulations and dynamics, making it a smart replacement for an old analogue mixer and a rack full of outboard FX.

The companion Qu-Pad app is a slick, intuitive interface for setting up the show and mixing live from your iPad, and there’s also a customisable Qu-Control app that lets you choose just a few essential controls that you really need in front of you for easy access during the show. Couple these with the Qu-You personal monitoring app for Android / iOS and Qu-SB is a fantastic choice if you’re mixing your own monitors and want to get the same great sound wherever you play.

With all of your settings saved and ready, plus multi-track recording and playback of previous shows for virtual soundchecks, you’ll be all set to play in record time. On top of the 18 on board inputs and 14 outputs, Qu-SB has you future-proofed with plug n’ play expansion up to 38 inputs / 24 outputs via a family of remote AudioRacks.

Having massive processing power and advanced functionality is great, but it counts for nothing if you can’t access the controls you need in a heartbeat. Qu-SB is designed to integrate seamlessly with the fully-featured Qu-Pad iPad app, providing super-fast, easy access to all settings, including channel processing, meters and RTA views, FX racks, scene management, USB audio control, setup menus and much more. Qu-Pad gives you instant access to all live mixing parameters and frees you to EQ and mix monitors on stage, roam around the venue whilst adjusting the PA, and mix the show from on-stage or the heart of the audience by connecting to the mixer over Wi-Fi.

Qu-You allows up to seven performers to control their own monitor mixes using any iOS or Android device, and frees up the engineer to focus on mixing for the audience. Qu-Control is a customisable iOS app providing a simple interface for non-technical users to control the essential parameters of Qu mixers when technical operators are not around. Qu Apps require the connection of a Wi-Fi router or access point to the mixer’s Network port.

Qu-SB’s sixteen AnalogiQTM total recall preamps feature zero crossing detection and an advanced padless 1dB step gain stage, closely allied to the DSP for optimal gain accuracy and audio transparency. The analogue signal is captured by high class, low latency 24bit analogue to digital converters matched to high quality 24bit digital to analogue converters to deliver the required outputs. The AnalogiQTM design has been refined over many months to offer superb transparency, minimal distortion and an ultra-low noise floor, with a warm, musical sound that is missing from some digital consoles.