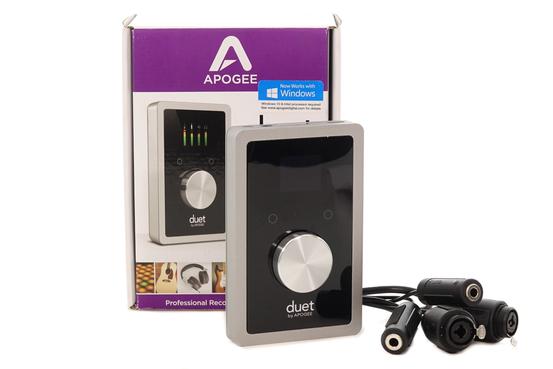 5 ⭐⭐⭐⭐⭐ This Apogee Duet Professional has been fully tested and serviced by our team of music experts and is like new. Someone has taken extremely good care of this unit and it’s in fantastic condition. All the photos to the left are of the item you would receive so you can see for yourself (yes, we really have someone downstairs photographing every preloved product). Includes: a USB cable, audio cables and a power supply.

With Duet’s 2 Combo inputs you can connect microphones, guitars, keyboards or line level devices such as external mic preamps or a mixing board. Duet also includes 4 analog outputs – 2 1/4” balanced outputs for connection to speakers or outboard equipment and a separate, independently controlled 1/4” stereo headphone output.

From the mic preamps to the AD/DA converters and the clocking, Duet is best-in-class and cutting-edge Apogee technology. With components carefully selected in critical listening tests and a highly efficient circuit design, Duet was built by Apogee engineers to make a difference you can hear.

Much like the AD/DA converters, Duet’s mic preamps feature the latest components and offer seamless click-free transitions as the gain increases and decreases throughout the incredible range of 0-75dB. This unprecedented feature allows you to dial in the perfect level, either with the controller knob or from within software, while delivering ultra-low noise and smooth, crisp detail. Duet’s mic pres are suitable for all dynamic, condenser or ribbon microphones, allowing you to capture any sound without compromise.

Duet’s breakout cable includes 2 combination mic/instrument connectors (XLR and 1/4” built into a single connector) and 2 balanced 1/4” connectors for speakers. The elegant single cable-to-junction design allows for easy cable management and the locking connection to Duet is robust and stylish.

Apogee is an award-winning industry leader in digital recording technology with over 25 years of experience. Preferred by recording pros around the world, Apogee products like Duet, Ensemble and Symphony I/O have been instrumental in creating countless GRAMMY® and OSCAR® winning recordings and have set the industry standard in professional recording for over two decades. Duet is built solidly on this reputation.

The high resolution OLED screen built into Duet’s top is the main control center for Duet, delivering visual feedback for multiple functions including metering, numeric value for input and output levels, input grouping, and phase, muting, phantom power and Soft Limit indication. With this display you know the status of any input and output at any given moment without having to refer to Maestro or your recording software.

Duet also introduces configurable touch-pads. The 2 touch-pads, located on either side of the encoder knob, allow you to quickly access output functions such as “Mute Outputs”, “Dim Outputs”, “Sum to Mono” or “Toggle Headphone Source”. Each are assignable using a drop-down menu within Apogee’s new Maestro 2. This unique feature allows you to select the function you want and access it directly from Duet without having to look at software.

Along with its sleek aluminium chassis, the multi-function controller knob is one of the most recognisable features of Duet’s design. This central control feature allows you to quickly and easily toggle through Duet’s inputs and outputs and set levels while looking at Duet’s dynamic OLED display.

While ESS Sabre32 DAC has been widely recognised and employed in the audiophile community as the next step in converter technology, Apogee is one of the first pro audio manufacturers to employ this DAC in an interface designed for audio and video professionals. ESS Sabre32 DAC technology, as employed in Duet 2, Duet for iPad & Mac, Quartet and Symphony I/O, is one ingredient in the Apogee Engineering Difference.