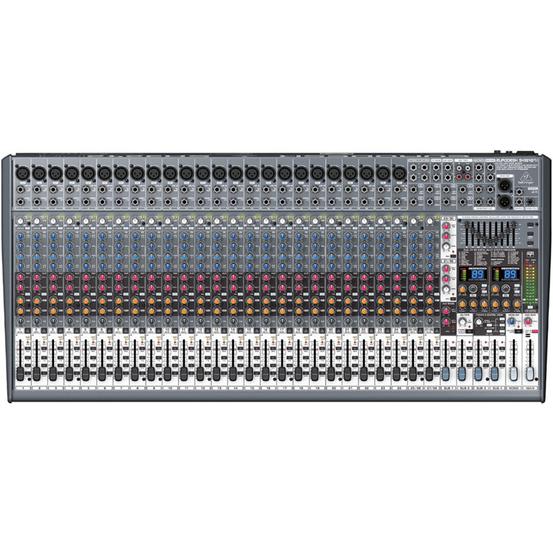 If you want classic analog handling but can’t skimp on superior digital effects and studio-grade mic preamps, the SX3242FX is your new best friend. This mixer’s 24 microphone inputs, 8 stereo inputs and 4 buses give you enough leeway to handle anything from a graduation speech to a 5-piece band to a whole church service with praise band and choir.

Each of the SX3242FX’s 24 mic inputs connects to our world-famous, studio-grade XENYX mic preamps. They are legendary for their high headroom, warm natural timbre and utter lack of background noise. Plug in a large-diaphragm condenser mic and track a vocal to hear XENYX’s rich detail and spaciousness. Plug in a dynamic mic and stick it inside a bass drum to appreciate the whopping headroom.

Whether you need to add a dab of reverb or delay to a live vocalist’s mic or warp a hard day’s studio session into psychedelic quicksand, the SX3242FX has you covered. We gave this mixer two independent studiograde 24-bit stereo FX processors with 99 awesome presets to provide the perfect sonic garnish. “Sure they’re great for live sound, but I have a lot of cool plug-ins for recording,” we can hear some of you saying. Truth be told, you never have too many effects. And when you hear the quality of the SX3242FX’s FX, you may want to give your overworked CPU a rest.

Naturally we gave you a whole palette of creative effects like reverb, chorus, flanger, delay and pitch shifter tones, as well as mind-bending multi effects to take your sound out of this world.

But you also get problem solving workhorses like compression and gating plus final effects such as Ultramizer, Ultrabass and Exciter that can put a PA or studio mix over the top. And because there are two processors, you can cue two separate effects, then apply one or both to channels 1 through 28 — compression for the vocalist, reverb for the vocalist and snare drum, for example.

A good thing to have on your side when you start reaching for those channel equalization knobs. At a live concert or in the studio.

Think of it as kinder, gentler, more musical EQ like the type found on classic British consoles from the 60’s and 70’s. Single malt scotch instead of Everclear. Home-baked cherry cobbler instead of an artificial cherry lollypop. British EQ’s distinct configuration of wider curves/lower Q and harmonic phase characteristics allows you to add or subtract EQ more generously than you can with conventional EQ circuit designs.

When you add low midrange, you get a firmer sound instead of a nasty bonk. When you back high frequencies off a bit, treble backs off just a hair instead of turning muffled.

All SX3242FX mono channels have low and high shelving plus a sweepable “midrange” you can move anywhere from 100Hz to 8kHz. Think of it as your roving English troubleshooter.

When it comes to suppressing feedback, the SX3242FX is like having a bloodhound trained to spot trouble frequencies a mile away.

The 9-band graphic EQ (which you can choose to apply to your main mix or monitor mix via the MAIN/AUX1 button) features the FBQ Feedback Detection system. It makes finding and adjusting critical frequencies a snap. Just push FBQ IN, then watch as LEDs on the individual EQ sliders light up, indicating which frequency bands are causing feedback. Simply adjust until the LED goes dim.

Some manufacturers make what they call 32-input mixers that count stuff like CD/TAPE IN as an input. But the SX3242FX really gives you twenty-four honest mono channels plus eight stereo channels, making it easy to accommodate a variety of studio or live performance configurations. You can connect up to 24 microphones or other mono instruments and up to four stereo instruments (keyboards or tone modules, for example).

You can combine these input in four different sub-mixes (we call them buses). That allows you to blend multiple channels—say all the mics on a drum kit or all the backup singers’ mics—to a single fader, which is easier to adjust for the overall mix that goes to the PA speakers. You can also use one or more of the sub-mix buses to create custom monitor mixes for picky members of your band (“More me! More me!”).

Not every town on the planet uses the same voltage common in yours. Unfortunately, this sometimes doesn’t occur to jet-setting sound technicians until they’re 5,000 miles from home. With the SX3242FX, this is never an issue. The internal autorange power supply can run on anything from 100 to 240 V with noise-free audio, top-quality transient response and low power consumption.