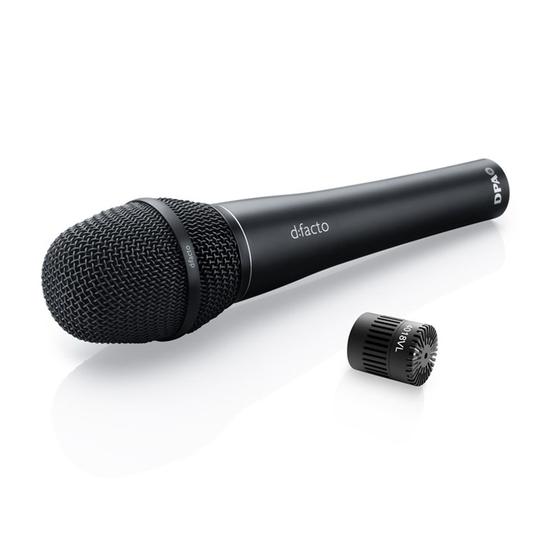 The d:facto™ series brings true studio sound to the live stage and broadcasting studio. These mics are available in an extremely linear version as well as in a version with a high-end boost. The modular nature of the d:facto™ series allows you to switch the capsule as well as the adaptor, making it the most flexible vocal microphone available on the market.

Engineered especially for vocal performances onstage, the d:facto™ holds a supercardioid capsule that is designed to reproduce every nuance of the human voice transparently, consistently and thrillingly. There are two versions available. The d:facto™ Linear Vocal Microphone (4018VL) is extremely linear. The d:facto™ Vocal Microphone (4018V) is linear but with a high-end boost. The 4018V is often chosen because it ‘cuts through’ on a broadcasting set, where the content typically ends up transmitted to built-in television speakers with limited audio quality.

Besides the linearity / boost, these mics are identical. Both feature an isolation-optimised supercardioid polar pattern. This directional characteristic offers the best of two worlds – from cardioid and supercardioid patterns. These mics can handle loud vocals with three-step pop-protection grid and best-in-class low handling noise. They also offer excellent sonic reproduction with all the detail and balanced linear phase and frequency response users have grown to trust for DPA Microphones.

d:facto™ Vocal Microphones are the ultimate stage mics – no matter if the performance is taking place in a cosy club or the largest concert hall. Like traditional supercardioid mics, the d:facto™ series enjoys high side- and rear rejection with a minimum of 9 dB attenuation to the sides. Yet it is not bound by the less desirable aspects of the supercardioid like the uncontrolled and nonlinear rear lobes, which can create feedback from stage wedges, because there is a sudden high frequency peak at the backside of the mic.

The d:facto™ series has a wider acceptance angle at the front of the mic than most supercardioids. The acceptance angle is identical to a first-order cardioid at ±60 degrees off-center, resulting in the same work field as a cardioid — just with extremely high and uniform side and rear damping.

When you choose your d:facto™ Vocal Microphone, you get to choose the microphone that best meets your need. An extremely linear version of the d:facto™ Vocal Microphone is engineered specifically for audio engineers who prefer setting their own unique impression on the final sound. A version with a pre-programmed high-end boost has a 3 dB soft boost at 12 kHz. Both versions of the d:facto™ are designed to capture electrifying live performances and accurately replicate a singer's voice transparently, consistently and thrillingly. These mics are optimised for use in sound reinforcement as well as recording applications. They offer natural sound, high separation from nearby sound sources and SPL handling up to 160 dB.