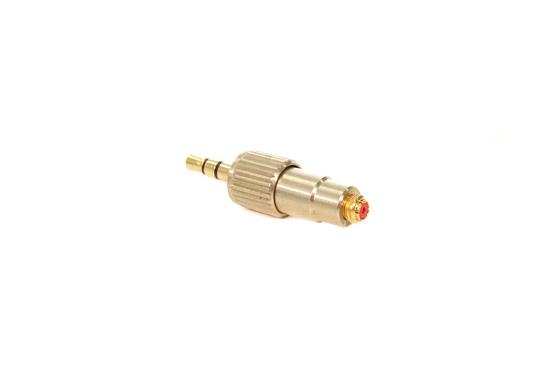 The classic 4088 Directional Headset Microphone is the industry standard in professional headset mics. It offers an open and natural sound making it ideal for both spoken word and vocal performance applications.

This mic provides excellent off-axis rejection in high-SPL situations. It efficiently suppresses distant sound sources making it perfect for demanding live performance environments where background noise and feedback are concerns. In high-SPL events, or when feedback is a concern, this microphone will tackle these challenges with ease. The bass response is designed for optimal linearity at 2-3 cm (1 inch) from the sound source. This means that the bass roll-off will be relatively prominent at a greater distance - a paramount factor when it comes to rejection of background noise and in the fight to avoid feedback.

The smooth and elegant design of the 4088 Directional Headset Microphone makes it the most invisible head-worn true cardioid microphone in the world. This microphone has a secure, dual-ear design that can be used for various performing talent applications. It has a small .64 cm (.25 in) diameter, which allows for discreet use. It only weighs 14 g (.5 oz) and is very comfortable when worn for long periods. The microphone can be mounted on the right or left side.

The boom is 3 cm (1 in) longer than on the omnidirectional version, which matches the need for placement at the corner of the mouth. To avoid "popping", the capsule should not be placed directly in front of the mouth

All CORE by DPA technology microphones are IP58 certified. This durability is achieved through a number of defense mechanisms:

A bit about cardioids

Named for its “heart shaped” polar pattern, a cardioid (or directional) microphone has the most sensitivity at the front and is least sensitive from the sides and at the back. They come in many variations – with wider or narrower angles of sensitivity (supercardioid, hypercardioid, wide cardioid etc.). Although cardioids also pick up sound coming in from the sides, this off-axis sound will normally be more or less colored and damped. The unique DPA capsule technique however skips the colorization of the sound coming from the sides or the rear of the mic and just reduces the sensitivity to these angles and thereby offers perfect sound stages. The amount of damping depends on the exact specifications of the mic.

A cardioid microphone is, by definition, damped -6 dB at the 90°side entry of the microphone but for many, the word cardioid generally covers mics with a directional pattern versus omnis, which pick up sound from all directions.

Due to their nature, directional mics are often used on the live stage – both during concerts as well as spoken-word events, to capture the focused sound of an instrument or voice. The narrow angle of sensitivity helps to minimize the bleed from other sounds on a busy stage. One thing to note with cardioid mics is the proximity effect, which causes an increase in bass response the closer the microphone is moved to the sound source. Therefore, when judging mic specs you should always look for a statement stating the distance at which the flat frequency response has been measured. In addition, cardioid mics are far more sensitive to wind, pop and handling noises than omni mics, so be sure to take precautions to guard against this.

The adapters for wireless systems give you flexible, simple and affordable possibilities when choosing the MicroDot termination and an adapter. You are no longer bound to one wireless system. As circumstances change, you can just switch your adapter, instead of incurring the cost of a completely new microphone. When you make the switch, you won't hear any loss or change in sound quality.

Our miniature microphones work with all leading wireless mic solutions, such as Lectrosonics, Sennheiser, Shure, Sony, Wisycom, Zaxcom and many more. DPA Microphones’ ingenious adapter system is one of a kind in the industry. It protects your investment in fantastic sound for years to come.

The adapter will also work with many third-party wireless transmitters and audio recorders wired for Sennheiser compatibility including the En2 TX from Audio Ltd and numerous devices from Rode, Deity, Saramonic, and more.