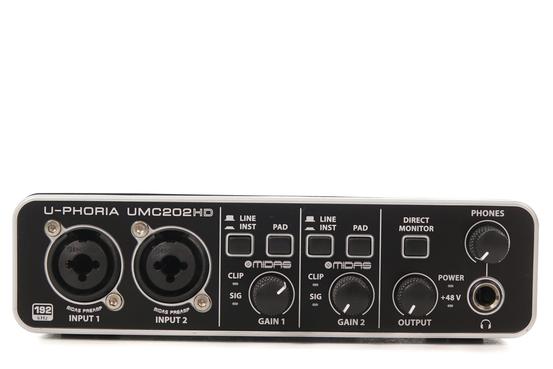 4 ⭐⭐⭐⭐ This Behringer U-Phoria UMC202HD USB Audio Interface has been fully tested and serviced by our team of music experts and works like new. There are some signs of previous use, but what fun is a rental if you don’t use it? Any signs of previous use are minor and superficial and there are no notable marks or scratches. All the photos to the left are of the item you would receive so you can see for yourself (yes, we really have someone downstairs photographing every preloved product). Includes: USB cable User manual

The incredible U-PHORIA UMC202HD bridges the gap between your creativity and your fans. This blazingly fast USB 2.0 studio in a box will have you recording your next masterpiece in minutes with all the connectivity required for your microphones, guitars, keyboards and even MIDI devices. Record the perfect vocal right to your computer-based DAW thanks to the 4 astonishingly pure, world-class MIDAS-designed mic preamps, which include +48 Volt phantom power for condenser microphones, all going through studio-grade 24-Bit/192 kHz converters for the best possible sound quality. Whether you’re a singer-songwriter, producer on the go, or just need a rock-solid interface for running backing tracks at a gig, the ultra- dependable U-PHORIA UMC202HD will help you shine in the digital domain.

When it’s time to make recording history on your Mac or Windows computer, plug in microphones, instruments or line level sources to the UMC202HD’s 2 combination XLR/TRS inputs for the ultimate in studio flexibility! Connect and communicate with MIDI devices to add the benefit of control surfaces to your studio workflow.

You take your tracks seriously, and the UMC202HD respects that, providing up to 192 kHz resolution for even the most demanding applications in music as well as video post production. Work with confidence and accuracy in your favourite recording software for professional results every time.

Ever since its formation in the 1970s, MIDAS has had a long history of innovation and leadership in the world of audio mixing consoles. Employed by the most famous touring acts and installations world-wide, legendary MIDAS consoles such as the XL4 and Heritage H3000 quickly became industry standards. MIDAS has earned their impeccable reputation due to their no-compromise approach for audio and build quality and in particular for their Award-winning Mic Preamps which are considered by industry experts as the industry’s best sounding designs. Building on this legacy, the XL8 and PRO Series of Live Mixing Systems continue this great heritage of Award-winning audio quality. Behringer is proud to incorporate a MIDAS designed mic preamp for the ultimate in high-quality audio reproduction in both live and studio environments. Find out more about MIDAS’ amazing legacy by visiting their extensive website.

The UMC202HD mix control allows zero-latency direct monitoring, which means musicians can experience their performance clearly – with no delay or lag in the returning signal, resulting in a better performance and recording. A powerful phones output has its own level control and Monitor A/B source select for DJ-style cueing. To make it a done-deal, Behringer provide free audio recording, editing and podcasting software, plus 150 instrument / effects plug-ins – just a download away at behringer.com.