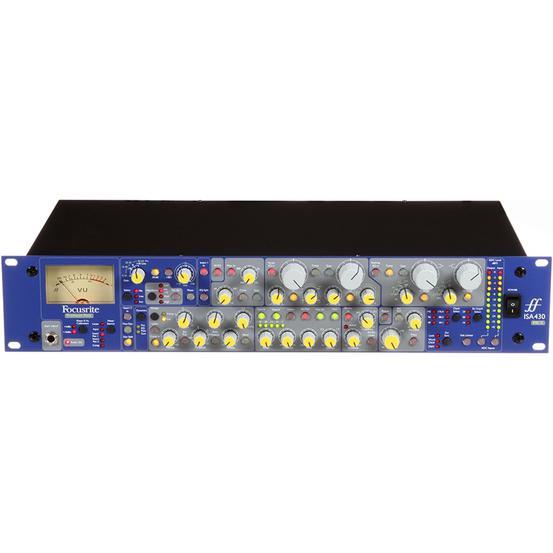 Focusrite’s ISA range is based around the original ‘no compromise’ designs that recording console design legend Rupert Neve built for Sir George Martin back in the mid-1980s, and every unit delivers the sought-after Focusrite Heritage Sound that lies behind thousands of top class recordings made over the intervening years in the world’s leading studios. With the ISA Range, you can put that sound at the heart of your own work – and the ISA 430 Mk II is the most sophisticated of them all: a complete channel strip in which every element can be used independently or patched in virtually any order – including a classic mic pre, versatile EQ, VCA/optical compressor, expander/gate and de-esser.

Inside the 2U rack-mount enclosure, the ISA 430 Mk II features a Lundahl transformer-input microphone preamplifier and equaliser based closely on the original ISA 110, itself based on the design for the A7971 console by Rupert Neve, incorporating suggestions from George Martin and engineer Geoff Emerick. Virtually all we’ve changed is to give the mic pre a variable input impedance to get the best out of any microphone, modern or vintage, accurately or for effect. There’s also a special “air” button that opens out the sound without EQ.

The equaliser itself features two separate parametric bands plus shelving low and high frequencies, high- and low-pass filters and the ability to switch individual EQ elements into the compressor side-chain for frequency-conscious compression, gate keying and other effects. Indeed, the four powerful processors that make up the ISA 430 MkII can all be used independently or patched into each other in a variety of ways for maximum versatility.

The dynamics section, once again, recalls the original Trevor Stride/Rupert Neve ISA 130 that dates back to 1987. It features a sophisticated expander/gate section as well as a versatile compressor, both featuring modern transparent VCA-based control elements for maximum compression without artefacts. But in addition, the compressor also features the original vintage optical design for a truly traditional sound, and you can also mix the original signal into the compressor output, maintaining dynamics as you take control. Like the other sections of the ISA 430 Mk II, there’s a “Listen” button so you can hear exactly what each module is doing.

The ISA 430 Mk II is supplied with analogue outputs for full integration into a traditional audio path. But it’s as perfect a front-end for a digital system as an analogue one, and with that in mind we’ve created an optional class-leading high-precision 192kHz, 24-bit 2-channel A-D card boasting 120dB dynamic range, that slots straight into the unit. Like the other sections of the ISA 430 Mk II, it can be used as part of the overall channel strip or employed independently.

Not only is the ISA 430 Mk II a powerful channel strip, combining heritage mic amps, equalisation and dynamics; and optional superb-quality digital conversion, each element (and in the case of the equaliser, each section) can be used as a completely separate device for the ultimate in versatility. The ISA 430 Mk II from Focusrite. It could be the last channel strip you’ll ever need.